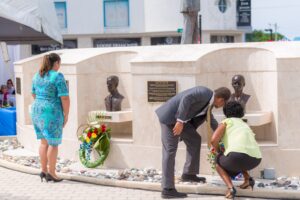 National Heroes Day 2022 observations will involve far fewer participants than usual in keeping with current COVID-19 protocols, according to the Protocol Office.

The proceedings on National Heroes Day will feature the unveiling of the bust of the newest national hero – Ms Leila Elberta Ross-Shier, Cert. Hon., and wreath-laying to recognise the outstanding contributions of our 10 national heroes and other nation builders. Due to public gathering limitations, there will be a combined parade contingent comprising four representatives from each of the seven uniformed services agencies.

“In the interest of safeguarding our honourees, and to keep within the 250-person limit for outside gatherings at this time, it has been decided to pare down this year’s ceremony,” said Chief of Protocol, Ms Meloney Syms.

“Even though this year’s theme for National Heroes Day recognises our uniformed services, it is not possible for the approx. 500 honourees and their loved ones to be present on the day – as is the long-established tradition. The planned award ceremonies in Cayman Brac and Grand Cayman have been postponed. We will hold ceremonies that remain within public gathering limits at a later date to acknowledge all awardees’ contributions to the development of this nation,” Ms Syms explained.

Monday’s event will be live-streamed on CIGTV, and Government’s Facebook and YouTube pages, as well as broadcast live on Radio Cayman, beginning at 9 a.m.