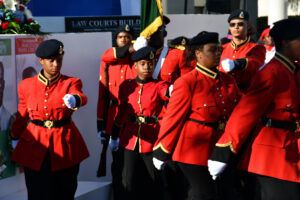 National Heroes Day in the Cayman Islands will be celebrated over three days this year with full ceremony and events on Grand Cayman and Cayman Brac, yet respecting existing COVID-19 protocols.

One main difference this year from previous years’ celebrations will be limits on numbers of who can attend, with attendance by invitation only.

However, to accommodate the general public, the plan is to provide live coverage on Government’s YouTube channel from both Grand Cayman and Cayman Brac. The link to the channel is :  https://www.youtube.com/channel/UCGVlgTtKrEQHpXgoGNH_e7w/live or http://bit.ly/govkylive.

The 2021 event aims to help the Islands “reflect on the national heritage” and simultaneously be “inspired for the future”. Celebrations will include parades by uniformed contingents.

Cayman’s seafaring heritage takes centre stage this year. Additionally, three National Hero busts will be unveiled at Heroes Square. Meanwhile, a number of Caymanians will be recognised for their contributions as exceptional members of the Islands’ community.

Yet another significant feature this year will be the honouring of the first eight recipients from the newly established Order of the Cayman Islands. Four Officer and four Member awards will be conferred during the investiture ceremony.

Parades will take place at all the events on both islands and also specially curated exhibits will provide historical insights on both Grand Cayman and Cayman Brac. However, there will be no post-event entertainment this year at Heroes Square or Pedro St. James.

A dress code of business attire is required for all attendees at all events. However, members of the CI Seafarers Association are asked to wear their Association polo shirts and hats. Attendees with ceremonial medals are advised to wear them.

Celebrations start on Cayman Brac and continue on Grand Cayman over the weekend.

Grand Cayman: In order to be able to accommodate as large a gathering as possible, celebrations are scheduled to take place over two days this year:

Chief of Protocol, Ms Meloney Syms, who is leading the planning, as well as coordinating volunteers, commented, “We are very happy to be organising National Heroes Day celebrations, which this year, despite COVID 19, is an expanded event over the long weekend. It has called for greater planning and execution and I am truly grateful for all involved who have risen so well to the occasion in the preparation and organisation of all events on both Cayman Brac and Grand Cayman. I invite all to participate in all events, whether by invitation in person or by viewing on CIG’s live online presentations.”