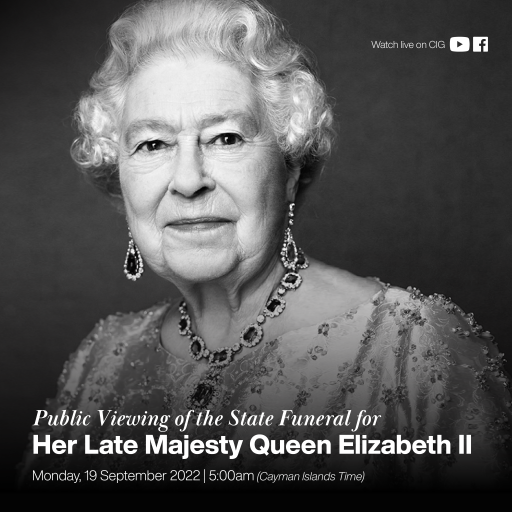 The people of the Cayman Islands are invited to join others around the world by viewing the state funeral at home or at one of the following designated locations:

Official Condolence Books will be available for the public to sign at all locations. Church doors will open at 4:30am ahead of 5am local start time.

A live discussion from 10:00 am – 11:00 am will also be streamed on the Cayman Islands YouTube channel and Facebook page.

The public will be able to call in to share their stories and treasured memories at this time. See full programme here: Cayman Islands Government (time.ly)

The Cayman Islands will observe National Silence for two minutes on

following the death of Her Late Majesty Queen Elizabeth II. The Cayman Islands Government invited radio stations across the Cayman Islands to observe two minutes of silence as a mark of respect for the late Monarch at 12:30pm on Monday, 19 September – the day of her state funeral in London.

Over fifteen radio stations have agreed to silence their airwaves.

The people of and visitors to the Cayman Islands are encouraged to join in the National Silence on Monday, 19 September at 12:30pm. Whether at alone at home or with family and friends, on their doorsteps, at a public gathering, or at a local hospitality venue, everyone is asked to pause and, if possible, stand at attention for two minutes as we mourn and reflect on the life and legacy of our late Queen Elizabeth II who served on the throne for over 70 years.

Hotels, restaurants, and other businesses that are operating on the public holiday Monday, 19 September are encouraged to pause operations (turn off ambient music, stop serving food/alcohol, and have wait staff and guests pause) to honour Her Late Majesty.

“Local businesses are saddened by the loss of the Queen and realize she was a true leader who selflessly served the people every day of her life. Most people in Cayman fondly remember the visit of then Prince Charles to the Cayman Islands in 2019 and will continue to show support during this national time of mourning”, Jay Ehrhart, Executive Director, Cayman Islands Tourism Association

”The Chamber of Commerce encourages its members and the wider community to observe two minutes of National Silence as a matter of respect and remembrance to Her late Majesty Queen Elizabeth II on Monday, 19th September from 12:30 to 12:32 p.m. Many Caymanians and residents share fond memories of her visits and her loyal and dedicated service. Let’s join the world in silent reflection as we cherish the memories of our late Beloved Queen,” Chief Executive Officer, Cayman Islands Chamber of Commerce, Wil Pineau, Cert. Hon. CCE.

The United Kingdom and Overseas Territories are also observing National Silence in tribute to Her Late Majesty.

Queen Elizabeth II’s state funeral, which will start at 5AM local time on Monday, September 19 will be aired live on CIGTV. The service will take place at Westminster Abbey, in the heart of London. There has not been a funeral for a monarch there since the 18th century.

CIGTV channels by carrier are:

For more information on events and updates visit: https://www.gov.ky/queen-elizabeth-ii/events