NAU Pilot Initiative Gets Off to a Strong Start 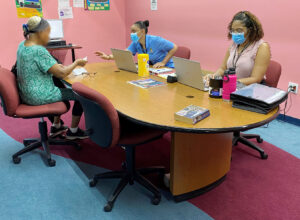 According to the unit’s Director Ms Tamara Hurlston, in its first 24-hours-in-total operation, The NAU in Our District pilot, has assisted 41 persons. Two-person teams completed six three to four-hour shifts, working out of East End Civic Centre and the North Side, Bodden Town and West Bay Public Libraries. Officers assisted clients in filling out assessment forms and processing queries.

The six-month pilot, proposed by the Ministry of Community Affairs and Councillor Austin Harris, aims to reduce the need of older persons, those with medical ailments and those with mobility issues from having to travel to the NAU’s main office. The Friday walk-in service, rotating across the districts, will subsequently limit the number of vulnerable persons exposed to the threat of infection while accessing NAU services.

Additionally, it is hoped that the initiative will help the NAU increase its understanding of its clients and the demands for information within the districts.

One person who attended the walk-in session at West Bay Public Library on Friday, 29 January was looking to obtain health insurance for her grandparents and great grandparents. Another client said he is unemployed due to the pandemic and is seeking CINICO insurance through the NAU.

As anticipated the majority of those accessing the advice and support are aged 60 years old and over. 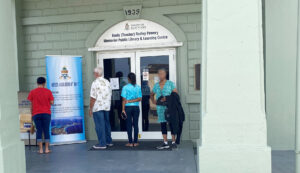 “We are happy to be able to provide access within the districts, to persons who may have transportation limitations,” Ms Hurlston confirmed.

“Customers who have given feedback have said they appreciated the convenience of having the NAU in their district. Most cited lack of transportation as the specific reason why they had accessed the trial service,” she added.

The Director said that her team will routinely evaluate the data from the pilot which closes at the end of June 2021.

For the full The NAU in Our District schedule visit the www.gov.ky noticeboard.