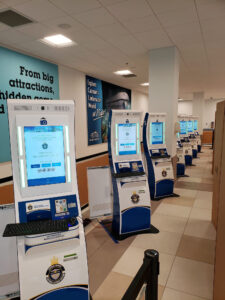 The self-service kiosks allows eligible travellers arriving into Grand Cayman to complete the landing process themselves.  The ABC kiosk solution has been designed to be both intuitive and user friendly.

Director of CBC, Mr. Charles Clifford says “the Automated Border Control (ABC) kiosks were initially launched a few months ago in a limited capacity.  This allowed us to monitor the performance, make adjustments, and to garner travellers’ feedback while we had less than normal arrivals. We are pleased to report that 9 kiosks fully operational and available for use.  This permits the landing process to be expedient and more efficient thereby allowing eligible travellers an improved customer experience.”

The kiosks are similar to those in other countries whereby individual travellers, or those travelling in family groups are prompted to scan their passport, have their photograph taken by the kiosk camera and answer a series of questions. Each traveller will complete this process and once the information entered is verified, a receipt will be issued for each individual. Travellers will then take their printed receipt along with their other travel documents to a CBC Officer.  Using the kiosks are completely voluntary and persons preferring to be processed by CBC Officers will still have the ability to do so. All arriving passengers will still need to adhere to the Control of COVID-19 Regulations at ORIA.

Through close collaboration with the Ministry of Border Control & Labour and CBC, the kiosk programme and machines were developed and provided by the Canadian Bank Note Company, Limited (CBN).  CBN is an established and experienced provider of secure and leading-edge custom border security solutions to Governments all over the world. CBN has implemented border management systems in various countries across the Caribbean. Similar to the Cayman Islands, the Governments of The Bahamas, Bermuda and Grenada worked with CBN to augment their border management systems capacity with ABC technology in the form of Kiosks and e-Gates.

For more information visit www.cbc.gov.ky or click the link https://bit.ly/3r7Gfus