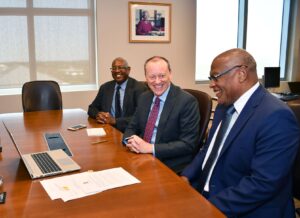 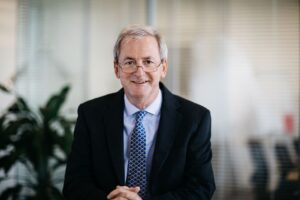 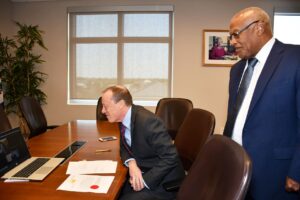 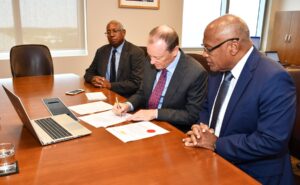 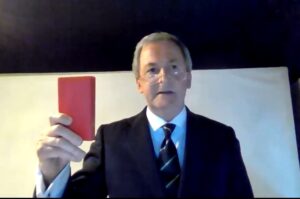 New Grand Court Judge in the Financial Services Division, Hon. Justice David Doyle took his oath of office online, which was administered by His Excellency the Governor, Mr. Martyn Roper.

In attendance at the swearing in ceremony, which took place in the Governor’s Office Tuesday, 23 March 2021, were the Chief Justice, Hon. Anthony Smellie and fellow Financial Services Division (FSD) justice, Hon. Ian Kawaley.

Prior to taking up his assignment in the Cayman Islands, Justice Doyle had served as a Deemster and First Deemster (equivalent to High Court Justice and Chief Justice respectively) in the Isle of Man.

Announcing the appointment earlier in March, the Governor’s Office noted that the Judicial and Legal Services Commission recently carried out an open recruitment process advertising the post both locally and overseas. Following a short-listing process, an interview panel interviewed three persons for this post ultimately recommending Deemster Doyle as the successful candidate. The Governor subsequently accepted the recommendation.

He stated, “The Financial Services Division is an integral part of our Grand Court providing an extremely high level of expertise in the complex litigation that emanate as a result  of the Cayman Islands’ world class standing in the financial industry.”

The Governor added, “I am delighted to have appointed someone of Justice Doyle’s calibre to the post of Grand Court Judge to serve in the Financial Services Division and warmly welcome him to the Cayman Islands.”

Also welcoming the new judge, the Chief Justice said he looked forward to Justice Doyle putting into practice his commitment, passion for the development of the law and the administration of justice, particularly in the financial services area.

“Justice Doyle brings extensive understanding of relevant local, regional and international legislation, in addition to his rich experience gleaned in hearing financial services matters in the Isle of Man and the Channel Islands. This in turn will further strengthen the Grand Court financial services sector.”

In reply, Justice Doyle said, “I feel truly privileged and greatly honoured to have been appointed as a Judge of the Grand Court of the Cayman Islands, to sit in the internationally well-respected Financial Services Division.

“I look forward to serving the people of the Cayman Islands and playing my part in providing access to justice, and supporting the rule of law. I shall be based full time in Grand Cayman and I am excited by the prospect of getting to know the Cayman Islands better and contributing to their modern and developing jurisprudence.

“I very much look forward to working closely with the Chief Justice and my other fellow judges to further enhance both locally and internationally the excellent reputation of the judiciary of the Cayman Islands.”