Nominations Open for Proud of Them Round 13 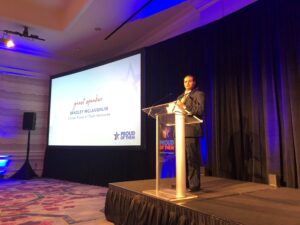 The Youth Services Unit (YSU) invites the public to submit nominations for round thirteen of the Proud of Them awards scheme.

Nominations for the programme to identify, appreciate and reward talent and excellence among youth in the Cayman Islands are now open. Nominations will close on 30 September 2021.

Youth Minister, Hon. Bernie Bush said, “I am pleased to announce the start of round thirteen of the Proud of Them programme.

“This annual government-run youth appreciation and recognition initiative is an exciting platform for us to acknowledge the exceptional accomplishments of 15 of our most able and talented young persons,” he added.

The number of awardees will increase from 12 to 15 as three more billboards, including two on Cayman Brac, have been added to showcase each honouree. Persons ages 10 to 25 years with a proven track record of excellence and success, in the categories of academics, careers, business, sports, culture or community service, are eligible for nomination.

Nominations forms can be completed online at www.youthservices.ky. The forms can also be accessed from the YSU website and submitted by email to info.ysu@gov.ky

Speaking about the move to paperless nominations, YSU’s Head of Unit Designate, James Myles, said, “For the last round, we switched over to electronic nominations to reduce processing time and to increase overall efficiency. We are asking interested parties to visit the Youth Services Unit website www.youthservices.ky/pot-nominate to complete nominations or to access a nomination form,” Mr. Myles stated.

A selection committee will review the nominations to select 15 honourees. The names of those chosen will be announced at an awards gala in the first quarter of 2022.

Each honouree will be awarded a $1,000 cheque at the awards gala. They will also feature on roadside billboards across the Cayman Islands for twelve months.