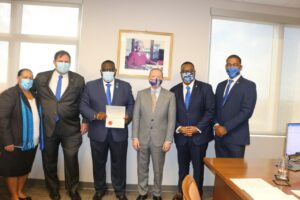 Cayman Islands Governor His Excellency Martin Roper appointed Bodden Town East Member of Parliament Hon. Dwayne Seymour as Parliament Secretary in the Governor’s office Wednesday morning before Parliament. Mr. Seymour abandoned the Opposition bench Tuesday night to join the Government bench. He will serve the Minister for Labour, the Minister for Housing and the Minister for Transport. Joining him this morning were Premier Hon. G. Wayne Panton and ministers Hon. Juliana O’Connor-Connolly, Hon. Kenneth Bryan and Deputy Premier Hon. Chris Saunders. Premier Panton said in Parliament this morning, “We are here today because the people made a choice in April to elect a government that cares about people; that cares about community; that cares about country. The move by Mr. Seymour to Government strengthens us in our commitment to our people and our country.”

Issued by: Office of the Premier (CIG)