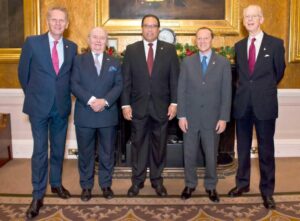 I was very saddened to hear about the passing of former Governor Bruce Dinwiddy CMG who served as the Governor of the Cayman Islands from 2002 until 2005.

Governor Dinwiddy’s tenure in Cayman coincided with the difficult period of Hurricane Ivan and its aftermath, an incredibly challenging period for him and everybody on our Islands.

Governor Dinwiddy did much to develop the UK/Cayman partnership, particularly on preparation for future natural disasters.

I know from discussions with many people across our Islands that he is fondly remembered for his kindness and affection for these Islands. He continued to support Cayman after his departure working closely with the Friends of Cayman (I met him at their London dinner in 2018 shortly after becoming Governor). He was also part of the UK Overseas Territories Conservation Forum.

He will be greatly missed. I am sure I speak for everyone on our Islands in expressing deepest condolences to Governor Dinwiddy’s wife Emma, his family and friends at this sad time.