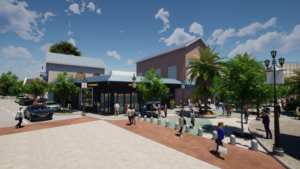 Plans are underway by the Ministry of Commerce, Planning and Infrastructure for the central business district enhancement project as part of the George Town Revitalisation Initiative.

Phase 1 of the work will be to upgrade Cardinall Avenue, replacing the road from asphalt finish to concrete coloured pavers, addition of trees and other street furniture such as seating and garbage receptacles.

The second phase of the works will take place at the intersection adjacent to the post office at Edward Street, Cardinall Avenue and Main Street. This will involve replacing the road surface, adding a circular monument garden, mature trees, urban lamp poles, seating, underground utility chase, manholes and drainage.

Similar work is proposed to take place in the third phase of the project on Main Street.

George Town Manager Colin Lumsden noted that the main objectives of the proposed project are to improve the aesthetic and character of the downtown area through appropriate design and build environment. “This initiative is aimed at greater foot traffic by locals and tourists in George Town while increasing security and safety by adding adequate lighting and pedestrian friendly spaces as well as enhancing the surroundings by providing public open spaces adjacent to businesses,” he said.

Mr. Lumsden further stated, “The cornerstone of any economic development weighs heavily on its downtown area and that is why this development will create a gathering area that is colourful, attractive and much cooler with added vegetation and trees for shading as well as lighter coloured finishes”.

The project was prepared in consultation with stakeholders and presented as part of the George Town Revitalisation Initiative plan to the public in 2016. The plan outlined a holistic approach towards revitalising George Town, in the spirit of new urbanism.

The project is expected to start in June and run for six months.