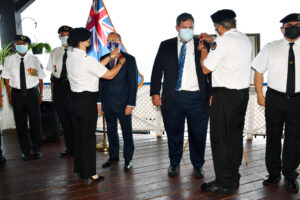 The annual poppy appeal for donations to benefit the 40 members of the CI Veterans Association (CIVA) kicked off today with a ceremony at the Wharf Restaurant.

To start the appeal, His Excellency the Governor, Mr. Martyn Roper and Premier, Hon. Wayne Panton were pinned with symbolic poppies, which signify the hundreds of thousands of armed forces personnel for their service and sacrifice, notably during wars.

Deputy Governor, Hon. Franz Manderson was also pinned at the event which was attended by Ministers, Hon. Sabrina Turner and Hon. Andre Ebanks. 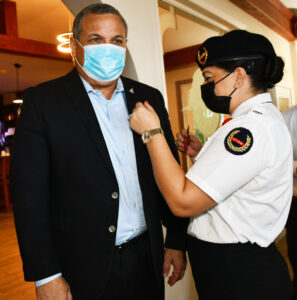 Each year, the appeal culminates in the annual Remembrance Day celebrations, usually preceded by a gala to celebrate Cayman’s veterans and their spouses.

This year’s gala was cancelled due to COVID-19 restrictions, especially since many veterans are among the elderly and vulnerable segments of the Cayman Islands community. Instead, today’s lunch event allowed the association to host some veterans and spouses, and to thank corporate poppy appeal donors for their contributions.

President McLaughlin announced the Flowers Group, which had made a generous donation could not attend. Donation pails and poppies were made available to be placed as collection 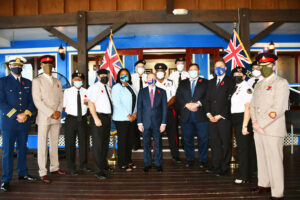 units in offices and businesses. CIVA members and volunteers will also collect funds at public places such as supermarkets during the next 30 days.

The appeal raises much needed funds for local veterans, who are often in need, but sometimes too proud to ask for help, the CIVA President explained. Some of the veterans rely heavily on donations from the association, which in turn seeks community donations. CIVA helps to pay their utility bills and assists with health care. Some veterans also rely on food vouchers from Fosters.

The President shared the recent case of a veteran for whom the Association had to step in to vouch for payment for serious medical procedures, although the veteran’s health insurance company ultimately paid. “We had to accept responsibility as this was a veteran in need. We don’t leave anyone behind. Your donations help us put their minds at ease,” he commented. “As has been said accurately about veterans: All gave some but some gave all,” he added.

He appealed to all in the community from individuals to corporate entities to donate liberally to ensure veterans’ and at times their wives’ needs are met and they can continue to live in dignity in a caring community.

CIVA asks those who wish to help by placing the collection pails and poppies in their premises for people to donate to contact Paul Ebanks at 916-0701, email: panda@candw.ky or Jillian Caines at 927-3242, email: Jilliancaines@gmail.com.