Premier presents to Chamber of Commerce: Strong economy helping Cayman through the crisis 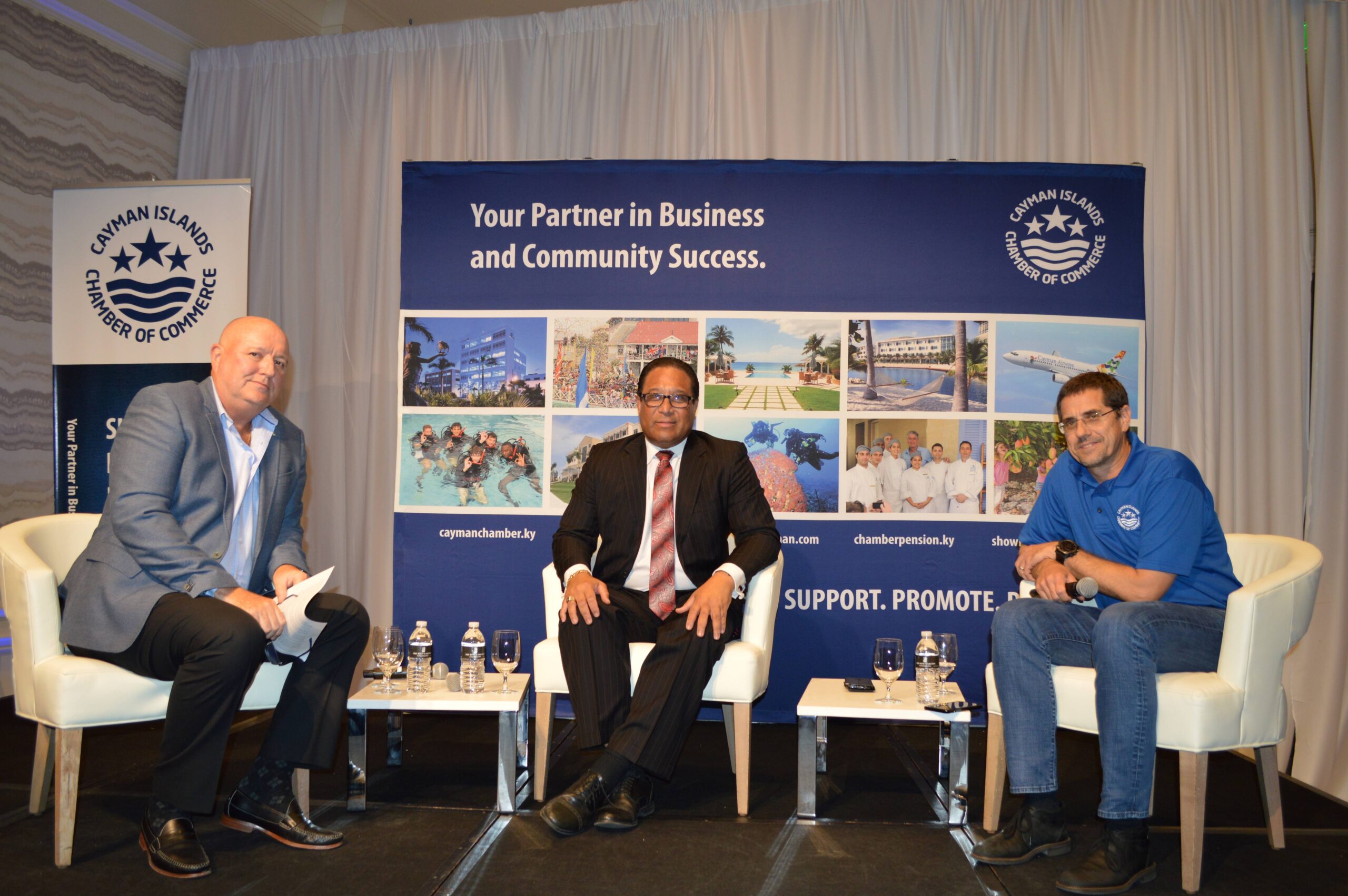 The Cayman Islands Chamber of Commerce’s January 28th AGM gave Premier Alden McLaughlin the opportunity to outline to the business community the steps the Government had taken during his eight years as leader to strengthen the economy. The country as a whole had therefore been in a strong place to weather the storm that the ensuing global pandemic brought in March 2020.

The Chamber, he said, had been with the Government all the way through the pandemic.

“From the first, very difficult decisions the government had to make last March in the face of the COVID-19 crisis, the support of the Chamber has been absolutely invaluable, particularly in assisting the people of our Islands as much as possible,” Premier McLaughlin confirmed.

The Premier went on to say that the willingness of Chamber CEO Wil Pineau and his team to get messages and advice out to members in a timely manner and then the willingness of the business community to stick to the rules had been “absolutely vital in achieving what has been a singular public health success story for these Islands”.

When taking up the mantle as Premier eight years ago, the Premier said he inherited government finances that were in “disarray” after the 2009 financial crisis. It was necessary for government to work hard to turn things around, in particular when it came to Government’s finances.

“In my view, our biggest achievement was to bring stable and effective governance back to these Islands,” he advised.

As a result, the Government attained strong sustainable levels of growth throughout the first six and a half years of the Government’s two terms, culminating in 3.8 per cent growth recorded for 2019 and a further 1.9 per cent rise in GDP for the first quarter of 2020. By 2019, Cayman’s economy was buoyant and was the envy of the region. Growth averaged more than three per cent in the previous five years, Caymanian unemployment was below five per cent and jobs were continuing to be created for Caymanians. Tourism grew to record numbers while the financial services business activity grew at almost four per cent on average. The development sector was flourishing and in 2019 alone nearly 750 projects were approved with a combined total value of more than $890 million, the Premier outlined.

However, in early 2020, the Premier noted that storm clouds were gathering and the Government, aware of the possibility that the coronavirus might hit Cayman, embarked on a plan to mitigate the impact of the virus.

With public health at the forefront of their focus, the Government shut down the border in March, an act which the Premier acknowledged caused “far-reaching ramifications to businesses and the economy. As a result, monthly stipends were issued to displaced tourism workers, Government funded isolation centres helped those needing to travel, the Small Business Centre played its part and a Government guaranteed loan scheme would assist eligible Caymanian businesses to obtain the necessary bank financing to keep them operational. 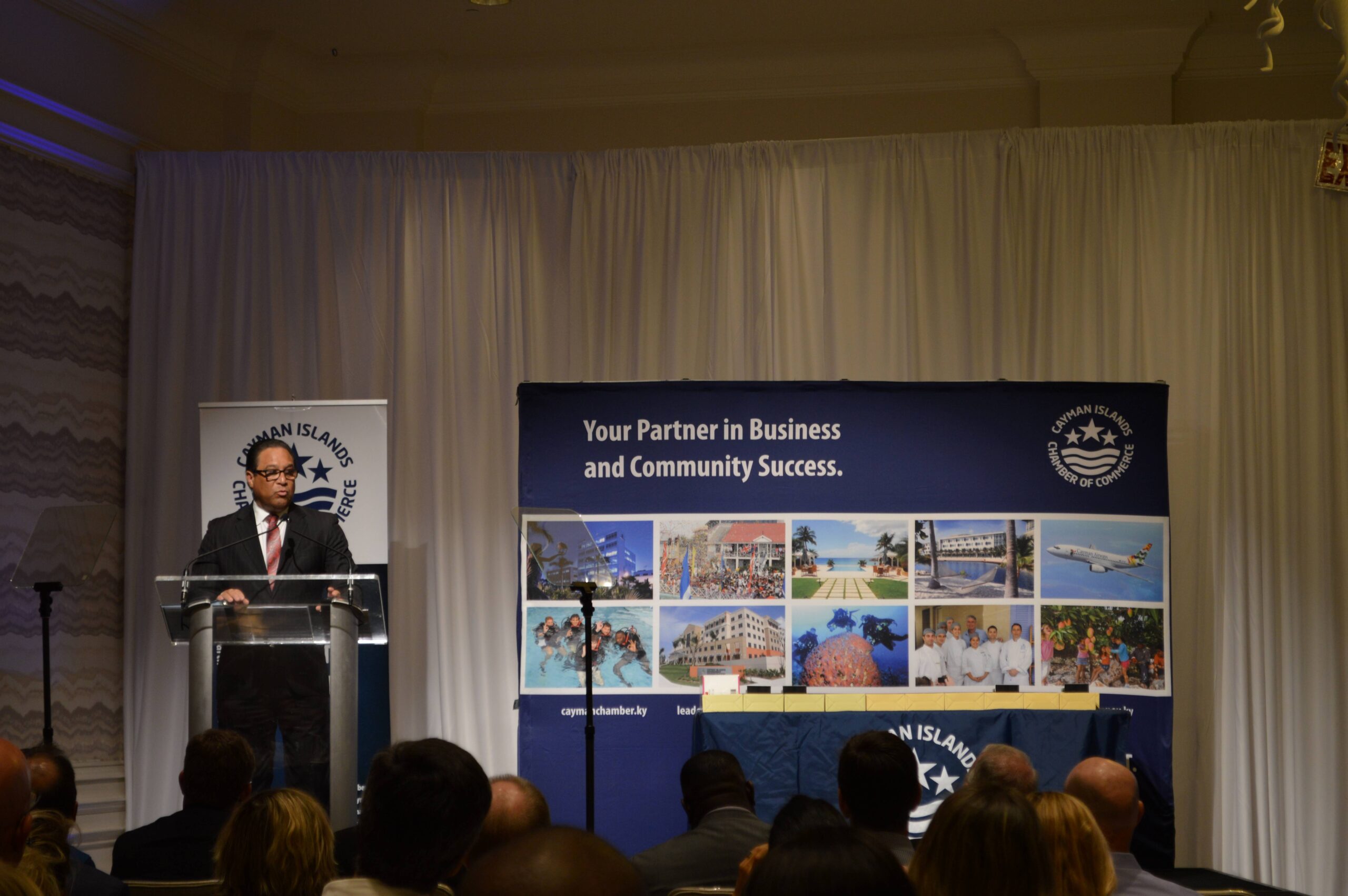 With the mass Covid-19 vaccination programmes taking place, the Premier said the country could now think “positively but cautiously” about re-opening Cayman. Additionally, provided that enough people took the vaccination, Cayman could be confident that its population would have a great deal of protection against COVID-19. However, he warned that the advent of variants of the virus, which had been detected in travelers to Cayman from the UK, would mean that any ideas to open at the end of March would have to be put on hold.

“…changing circumstances mean that of necessity today’s plans must be flexible,” Premier McLaughlin said. “With the arrival of new COVID-19 strains and concerns over how much protection the current vaccines will offer against these new variants, it has become increasingly challenging to develop a firm timetable to get the Cayman tourism economy up and running again.”

As a result, Cayman businesses would most likely have to wait until the end of the year before getting back to a more normal operation.

‘…we remain hopeful to be in a position to enjoy an improved stay over tourism high season. This will not be ‘business as usual’ but there is a real prospect that it could be ‘business as near normal as is possible as we close 2021 and enter 2022,’” the Premier stated.

In the meantime, Cayman’s financial services industry, notwithstanding some challenges, was doing well, as was the construction and development industry.

PPM for the next Government

The Premier then outlined why he believed the PPM should be voted in at the May election, highlighting a series of commitments they made at the start of their tenure eight years ago which had now come to fruition, such as: the strengthening of Cayman’s education system; an extension to the Marine Parks programme; the capping of the Landfill site; the development of the Customs and Border Control unit and Coastguard; supporting the RCIPS; providing better equipment to the Cayman Islands Fire Service; investing in road and airport infrastructure; and developing the mental health unit. The Government had also introduced legislative and Constitutional advancements to the betterment of the Islands, he said.

The Premier rounded off his presentation by naming Finance Minister Roy McTaggart as the person most suited to taking over as Premier come the May election.

The Premier had high words of praise for Minister McTaggart:

“I have no doubt that he has the will, the determination and the credibility necessary to take our country forward. I feel confident that the Progressives Party, of which he is a member, will choose him at the Party Conference as the Progressives’ new political leader and I equally have confidence that not only will he be returned by the good people of George Town East, but that his colleagues will support his leadership as Premier,” he stated.