Remembrance Sunday 2021 “Lest We Forget” 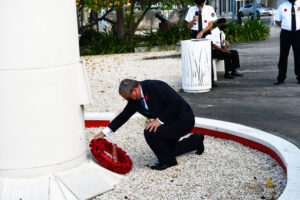 Due to the COVID-19 pandemic, this year’s Remembrance Sunday observance, on 14 November 2021, took the form of private wreath-laying ceremonies without the usual contingents on parade.

A total of 49 wreaths were laid at memorial sites on Grand Cayman and Cayman Brac in honor of those who have died in military action.

Commenting on the proceedings Chief of Protocol Meloney Syms noted “Unfortunately due to the ongoing COVID-19 pandemic and the risks posed to elderly and vulnerable veterans, we were unable to have our traditional annual parade. Instead, we invite members of the public to visit both memorial locations to lay wreaths privately while observing 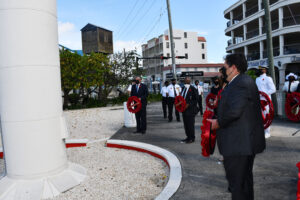 Simultaneous ceremonies on Grand Cayman and Cayman Brac began at 10:50 a.m. and included a two-minute moment of silence at 11:00 am in remembrance of the fallen.

The programme continued with the sounding of the Last Post and the laying of wreaths, at the Cenotaph at Elmslie Memorial United Church and the Seamen’s Memorial nearby.

This was led by His Excellency The Acting Governor, Franz Manderson, followed by Premier, Hon. Wayne Panton, as well as representatives of Parliament, the uniformed services, and other 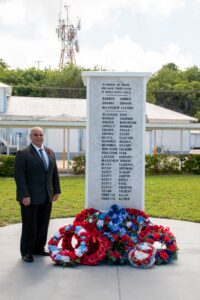 “Today we honor the many heroes who sacrificed their lives for our freedom, with special mention to our local heroes who rose to the task and joined in bravely on behalf of our Islands” noted HE the Acting Governor, Franz Manderson.

Other participants were Girls Brigade; Boy Scouts; Cadet; Pathfinders; and the Lions Clubs of Grand Cayman and Tropical Gardens.

Paying tribute to those who lost their lives in military action, District Commissioner Mark Tibbetts also led a brief private wreath-laying ceremony on Cayman Brac. During the ceremony on Cayman Brac, Henry Scott laid wreaths on behalf of both the Veterans and Seaman’s Society of Cayman Brac and Little Cayman and the Cayman Islands Seafarers Association. Ceremonial wreaths were also laid by other unformed services, organisations, and community groups. 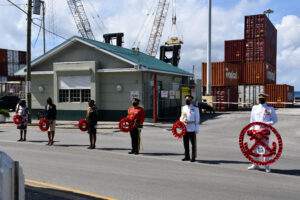 In addition Cayman Islands Representative to the UK and Europe, Dr Tasha Ebanks-Garcia, attended the UK’s National Service of Remembrance, held at the Cenotaph on Whitehall, London to lay a wreath in memory of the valiant contribution of citizens of the Cayman Islands, who fought and died for the British Crown.

The Protocol Office invites members of the public to share memories of their wreath-laying with the wider community, by tagging the Cayman Islands Protocol FB page and using the hashtag #remsunday2021. For further information, contact the office number 244-3612 or protocol@gov.ky.\