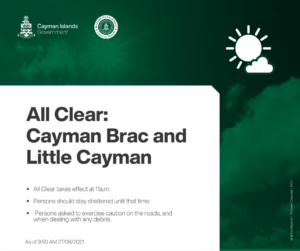 The National Emergency Operations Centre, in consultation with the National Weather Service, gave the All Clear for Cayman Brac and Little Cayman at 11 a.m.

The Sister Islands had experienced strong wind, heavy rain and significant power outages over the last 12 hours or so as Tropical Storm Ida passed through the area.

Expressing satisfaction that all three Islands were now in the clear, Deputy Governor Hon. Franz Manderson, who chairs the National Emergency Operations Centre (NEOC), says attention will now focus on assisting Cayman Brac and Little Cayman with any recovery efforts.

“Damage assessment is completed in Little Cayman and underway in Cayman Brac. The police helicopter will be doing aerial reconnaissance there shortly. The Community Emergency Response Teams (CERTS) will be doing wellness checks on vulnerable persons. In addition power has been restored to most of the island”, Mr Manderson updated.

The Deputy Governor added “We are thankful that the Cayman Brac and Little Cayman will soon be able to put Tropical Storm Ida behind them. We will continue to closely monitor their situation over the next few hours and are committed to providing them with whatever support they may need.”

The two emergency shelters that were open in the Sister Islands- Aston Rutty Centre on Cayman Brac and the Public Works Department Building on Little Cayman- are being deactivated officials note.

In addition the Sister Islands Emergency Committee which coordinates disaster response for both islands is being stood down.

Flood and marine warnings remain in effect for the Cayman Islands. The National Weather Service has noted that there is the potential for up to 10 inches of rainfall between Thursday and Saturday. The forecast also points to wave heights of up to 10 feet.

NEOC notes that roads in the Cayman Islands are wet and urges drivers to exercise caution.