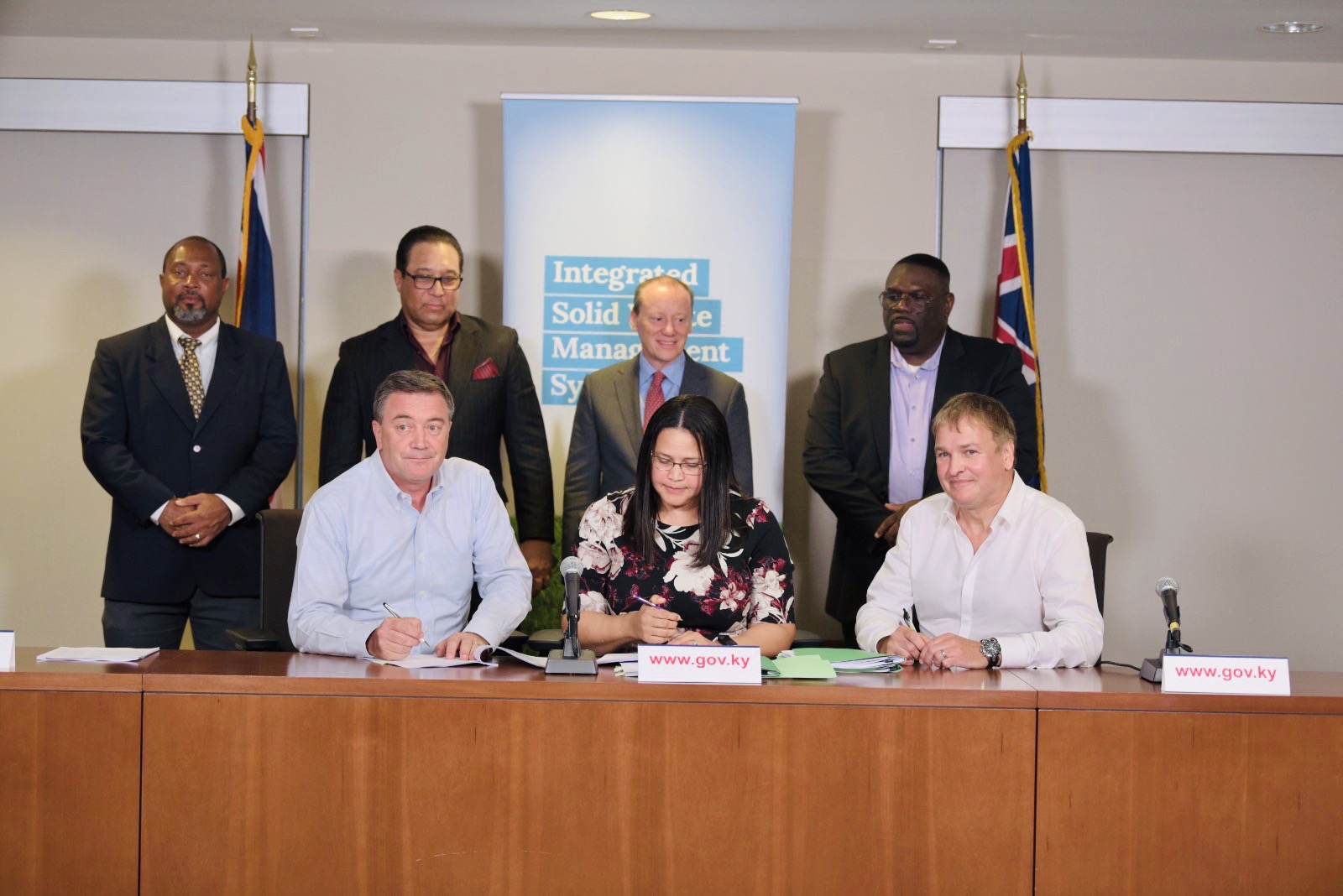 Government and the Dart-led Consortium have signed a number of agreements for pre-construction works to advance strategic elements of the Integrated Solid Waste Management System (ISWMS) project, which is to be operated as a public-private partnership.

The agreements, signed today (Tuesday, 13 October 2020) will allow the Consortium to continue the remediation and capping of the existing George Town Landfill (GTLF) at an estimated cost of KYD20 million.

The agreements will also allow the Consortium to finalise design details for the project, including the energy recovery facility, otherwise known as waste-to-energy, in preparation for an Environmental Impact Assessment (EIA) and submissions to the Planning Department.

The closure, capping and remediation of the GTLF will be undertaken in phases, with the entire mound covered with an initial regulating layer by the end of this year and the entire remediation completed by mid-2022.

Premier Hon. Alden McLaughlin, who served as Minister for Health when the ISWMS project was first announced, said he was pleased the project had reached a point where the people of the Cayman Islands could begin to see the realisation of Government’s vision for waste management in the country.

Thanking the members of the project team for their perseverance, current Health and Environment Minister Hon. Dwayne Seymour added that he understands public frustrations with the length of time taken over negotiations, but notes that this will be the country’s first public-private partnership and that the timeframe is not uncommon for infrastructure projects of this size and complexity.

“The negotiating team has brought a depth of technical expertise, knowledge and enthusiasm to a painstakingly detailed process that will serve the long-term interests of Caymanians and residents alike. This has resulted in an agreement for pre-construction works that will significantly impact how we manage solid waste in this country, and which has been achieved in partnership with the Dart-led Consortium,” commented the Minister, adding that the public can expect further updates as project works progress.

“The Dart-led consortium is pleased to be able to progress these strategic aspects of the project that benefit our entire community. The ongoing capping has already had a positive effect on the visual and environmental impact of the George Town Landfill,” said Dart President Development Delivery & Infrastructure Cameron Graham.

Mr Graham added, “In partnership with the Cayman Islands Government, we are committed to ensuring that the ISWMS solution be implemented to provide a long-term, environmentally sustainable and value-for-money solution for the country.”

The Department of Environmental Health is currently clearing an area of the GTLF adjacent to the Esterley Tibbetts highway, to allow landfilling to continue on the site without increasing the height of the main mound. This will remain in place until the new energy recovery facility is completed at the end of 2023.

The current GTLF, which reaches the end of its life in 2024, is to be replaced with the new ISWMS facilities, including an energy recovery facility that will generate significantly less volumes of waste material in the form of ash.

The new ISWMS system, when it is fully in place and operational, is expected to process and divert up to 90 per cent of waste from being landfilled in the future, achieving a sustainable solution for solid waste management in the Cayman Islands.

The final contract for the Consortium to design, build, finance, operate and maintain the full ISWMS facilities will be signed by the end of the year.