Statement on the passing of Mr William (Bill) McTaggart 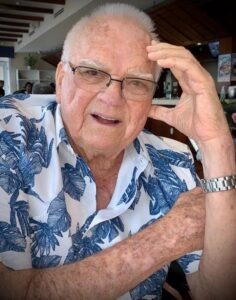 The Progressives family is deeply saddened to learn of the passing of Mr William (Bill) McTaggart, father of the Hon Roy McTaggart.  Bill McTaggart, affectionately known as “Uncle Bill”, was a respected Caymanian entrepreneur best known for the business that he founded in October 1964.

Sir Alden McLaughlin, Progressives Party Chairman, said, “Like so many across these Islands, I am saddened at the sudden passing of Mr William (Bill) McTaggart, also known fondly as ‘Uncle Bill’.  Uncle Bill was one of that generation of iconic Caymanians whose entrepreneurial spirit and community-mindedness helped shape the Cayman we enjoy today.

I have known Uncle Bill my entire life.  The McTaggart family resided on Crewe Road, where I grew up, and his son, Capt. Chris McTaggart and I went to school together.”

“Uncle Bill was well known and much loved for his jovial nature, generosity, and community spiritedness.  Although he was engaged full-time in building the successful business which now bears his name, he still devoted much of his life to community service.  One of my favourite childhood memories is of Christmas time, and Uncle Bill dressed as Santa Claus with Mr Graham Thompson as the Clown arriving at the airport on the Cayman Airways DC 3 to distribute candies to hundreds of excited children.  Beyond that annual community service, Uncle Bill was a stalwart member of the Rotary Club of Grand Cayman and was involved in numerous community projects and programmes for many decades.”

“Today, Cayman has lost a true pillar of the community.  He was a man who loved his country and people profoundly and contributed generously of his time and means to make the lives of others happier and better.

On behalf of the Progressives and my own family, I offer condolences to his widow, Debbie, to our Leader, Hon. Roy McTaggart, and to his other children, grandchildren, and extended family.”