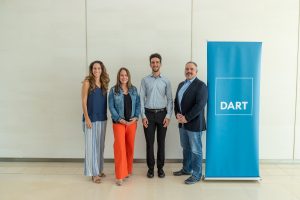 Dart CEO Mark VanDevelde said, “Our Dart Scholars are a group of exceptional young men and women who fill me with confidence for the future. Driven by intellectual curiosity and a desire to help solve the world’s problems, empowered by critical thinking and problem-solving skills learned through the study of STEM, they have the ability to make a difference. I am impressed by the positive impact our three new Dart Scholars have already made in our community, and look forward to seeing them grow in the years ahead.”

In addition to financial support, Dart Scholars receive mentoring and work experience opportunities at Dart and high school Dart Scholars are invited on an annual enrichment trip, travel permitting. Applicants are required to complete a blind-selection process that includes a written test and several rounds of interviews with the selection panel and senior leadership at Dart.

Adrien graduated Cayman Prep & High School this month with top awards for Chemistry, Further Maths and Overall Academic Achievement. He will start his undergraduate degree in Mechanical Engineering at Imperial in September as the foundation for a career as a robotic engineer. During high school, Adrien took every opportunity to participate in robotics programmes, from early LEGO competitions to representing his school at FIRST Tech challenge. He was a selected as a member of the Cayman National Robotics Team two years running, competing in the FIRST Global challenges in Mexico and Dubai. He now mentors younger children at robotics camps and tutors GCSE students in chemistry.

Jake is a talented mathematician who has won the Junior Minds Inspired Maths Challenge for the past two years. Starting his GCSEs next term, Jake will focus on STEM subjects with the goal of studying engineering or neuroscience at a top tier university. Outside the classroom, Jake is a keen swimmer and kite surfer – two sports he put to use when fundraising for local charities. During lockdown, Jake and friends kite surfed the length of Grand Cayman raising $55,000 for Cayman ARK’s soup kitchens. Last year, he became the youngest swimmer to cross the channel between Cayman Brac and Little Cayman.

Known as Siri, Sirichandana is a straight A student at Layman Scott High School. Inspired by her mother, Siri’s goal is to become a physician and help others through her knowledge of science and technology. Her community involvement started at a young age having joined the Girl Scouts when she was nine and she is currently Secretary of the Leos Club at Cayman Brac. As president of her school debate club, Siri enjoys public speaking and advocating for causes that support the betterment of society.

With more than 30 applications received in the high school category this year, Dart also recognised the three candidates who successfully made it to the final round of interview. Matthew Huys (Clever Fish), Nathaniel Shaughness (Cayman International School) and Caitlyn Darby (Cayman Prep & High School) each received an award presented by Dart executives.

Since launching its scholarship programme in 2012, Dart has awarded a total of 22 high school scholarships and 27 university scholarships to some of the worlds’ top academic establishments. 85% of Dart Scholars move on from undergraduate study to complete a masters or PhD.