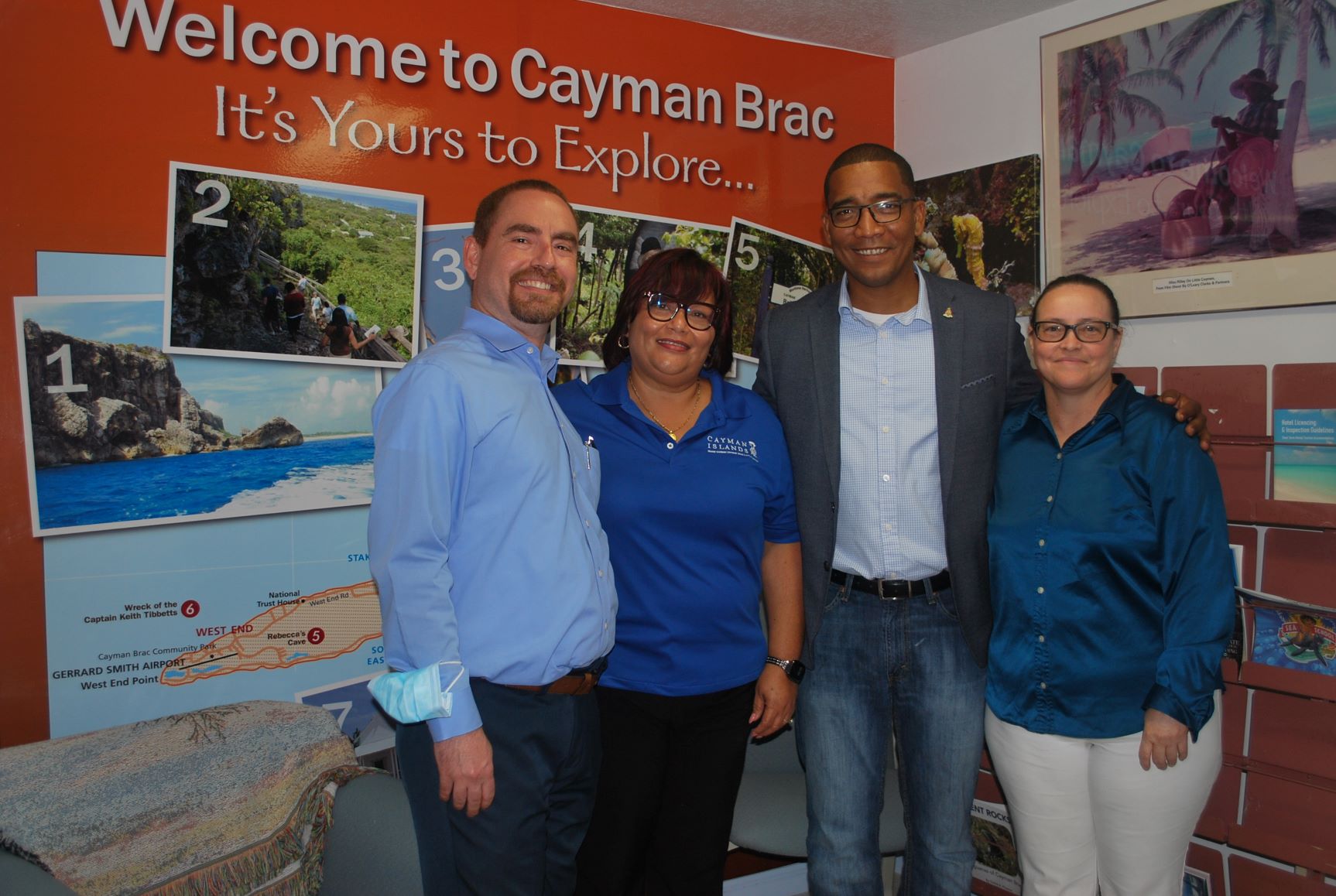 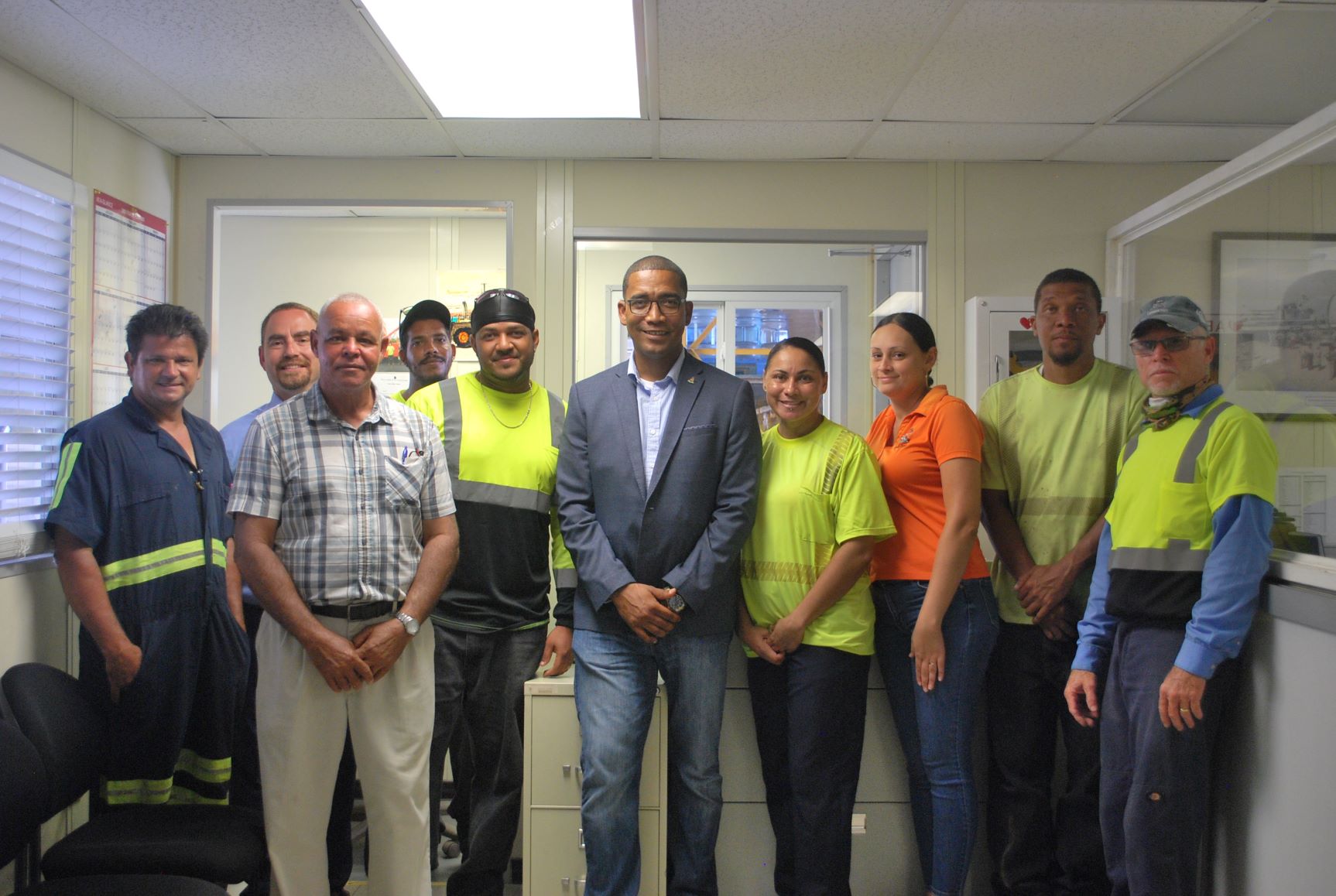 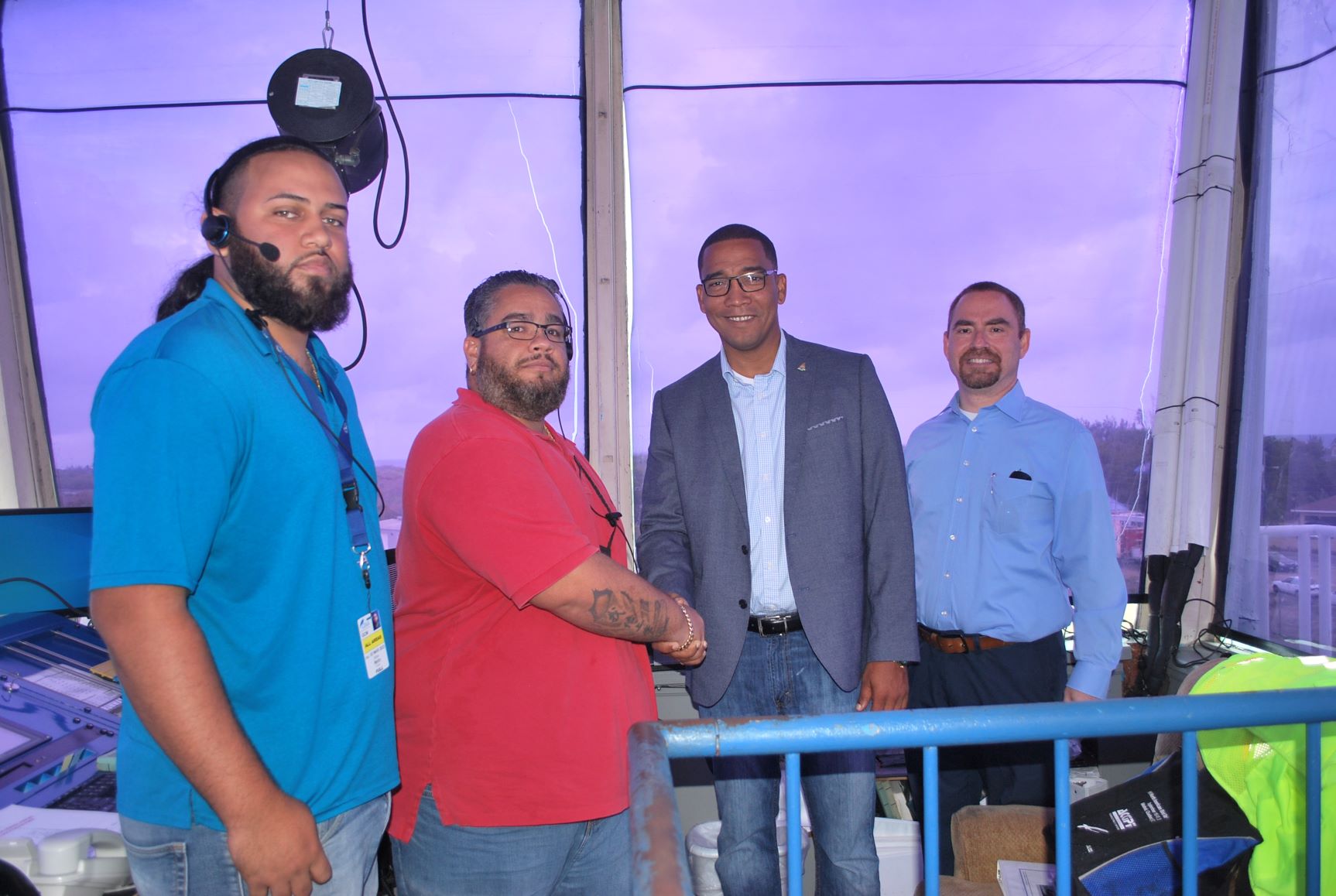 Hon. Kenneth Bryan, Minister for Tourism and Transport visited Cayman Brac on Friday 21 May, to tour the Departments and Statutory Authorities which fall under his Ministry’s area of responsibility.

The first stop was a visit to the Cayman Islands Airports Authority (CIAA) offices, which are situated at the Charles Kirkconnell International Airport.  The tour was led by Miguel Martin, Manager of Airport Operations, and began with a steep climb up to the air traffic control tower where Minister Bryan was introduced to two air traffic controllers and observed with interest as they performed their duties.

At ground level the tour continued through the passenger facing areas as well as to the back offices, where the Minister met staff from other sections, including security and Customs and Border Control officers.

On the opposite side of the airport building the Minister toured the area occupied by Cayman Airways (CAL) and enjoyed a meet and greet with staff while listening to some of their concerns, as well as suggestions for improvement. The tour of Cayman Airways was led by Fabian Whorms, President and Chief Executive Officer, accompanied by Paul Tibbetts, Executive Vice President Finance & Commercial Affairs and Lucille Walton, Station Manager.

A short walk away from the main airport terminal, Minister Bryan visited the CAL reservations and cargo centre. As well as managing local and international cargo carried by the airline, the office also handles purchasing and answer telephone calls re-routed from Cayman Airways reservations when agents in Grand Cayman are occupied assisting other callers. The office was opened in 2013 and is currently run by two full-time staff members.

After leaving the airport compound, Minister Bryan and CO Bodden stopped at the Department of Tourism’s satellite office which is situated in the former Port Authority building adjacent to the West End Community Park.  The office typically assists tourists and provides them with information, brochures and maps, but since borders are closed, the Department now assists the influx of visitors from Grand Cayman. The two staff members also inspect licensed tourism properties and conduct courses such as Know Your Cayman Islands and PRIDE training via online webinars for tourism and hospitality workers.

The final stop on the tour was to the Port Authority. Minister Bryan and CO Bodden were met by Dale Christian, Port Manager, who escorted them around the facility while providing an overview of the Port’s operations.

At the end of the tour, Minister Bryan took the opportunity to hold a brief meet and greet with the Port Authority staff members.

Reflecting on his full day tour, the Minister commented “It’s important for me to get a good understanding of the important work that our employees in these agencies do on behalf of the people of the county, and that’s why I’ve made a point of getting to Cayman Brac at the earliest possible opportunity since becoming the Minister for Tourism and Transport, he said.

“Since our borders closed, I’m pleased that staycations to Cayman Brac have been on the rise, which is helping to keep businesses open till tourism is able to return. This is a good thing and I’m happy that Cayman Brac seems to be thriving from this unexpected new line of business generated from Grand Cayman.”

“As the Minister with responsibility for Tourism I intend to visit the Sister Islands regularly and will be taking a long, hard look at the resources and facilities that we have now, versus what we will need in order to sustainably plan for future growth in Cayman Brac; without comprising the natural beauty and tranquillity we all love so much,” he said.

Minister Bryan plans to visit Little Cayman in the near future.