Travel Regulations to be Amended 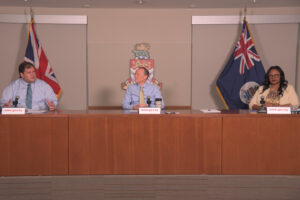 Following the confirmation of 24 community transmission cases of COVID-19 on Grand Cayman, anyone travelling to the Sister Islands from Grand Cayman who has not been fully vaccinated within the previous 14 days must provide a negative PCR test certificate from an approved laboratory, no more than 48 hours prior to departure.

Inter-island travel from Grand Cayman to the Sister Islands will be remain the same for verifiably vaccinated individuals.

Premier Hon. Wayne Panton announced at a press conference on Friday, 17 September at the Government Administration Building the inter-island travel restrictions, which will go into effect once the revised travel and boating regulations are published early next week.

The increased COVID-19 suppression measures follow the Government’s decision to pause the transition from Phase Three to Phase Four of the Cayman Islands’ border reopening plan earlier this week in the face of renewed community transmission of the virus and increased public concern.

The Islands were scheduled to move to Phase Four, featuring more relaxed border control measures allowing greater numbers of visitors into the country, on 14 October 2021. This schedule changed following confirmation of community spread in two separate clusters of coronavirus infection, one of which affected a local primary school.

The Premier explained, “This pause gives us an opportunity to strengthen some of our controls so that we reduce the likelihood of a surge of COVID-19 cases that puts lives and all commerce at risk. Once we go through this process, Government will have a better sense of the way forward and our citizens may have increased confidence in our local ability to re-join the wider world.”

Premier Panton also emphasised that before the Cayman Islands relaxes controls, Government is seeking to ensure the Islands’ “actual resilience is as robust in tackling the current outbreaks as we have believed them to be”.

He said Government is purposely taking this pause on reopening to ensure “the children are protected, limit the spread of the virus and address fears while examining the way forward”.

Replying to queries, the Premier said while the pause will not be lifted on 14 October, it would be difficult to pin it down to a specific date at this time.

However, he said the situation has been somewhat reassuring with nearly all positive community transmission cases remaining asymptomatic.

The Premier underscored the need for residents to remain calm and be assured that Government is taking the safety of all, but especially that of children and parents, very seriously.

Chief Medical Officer Dr. John Lee noted that over 7,000 PCR tests were conducted since last week, with the overwhelming majority testing negative.  He said these results highlight the fact that wide-spread vaccinations work in suppressing the disease.

Rev. Godfrey Meghoo of the United Church led prayers at the start.

Premier Panton said changes in travelling and boating regulations will come into effect early next week.

The entire proceedings of the press conference can be viewed on the Government YouTube Channel using the link https://youtu.be/X24s17KdNLk .