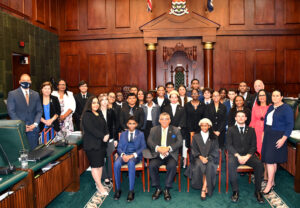 Youth Parliamentarians proved their mettle on a momentous day on Monday, 14 March 2022 when the youth took over Parliament. Twenty-four young women and men demonstrated themselves to be contenders for future politicians and leaders of the Cayman Islands. 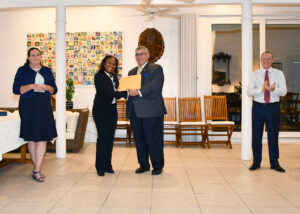 The youth participated in a gruelling day of debates on a government bill titled The Sexual Harassment Bill, 2022, which passed, and a Private Member’s Motion seeking restrictions on high cost housing and implementation of a land and housing purchase licence for non-Caymanians, which did not pass.

After the proceedings, they were regaled to a reception hosted by the Governor at Government House where they received certificates, plaques and a commemorative photograph to mark their participation. In addition, the top debaters on the two benches – Ms Sienna Jack for Government and Ms Hannah Bodden for the Opposition – received recognition. 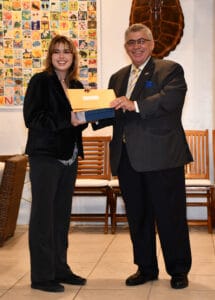 Heartily thanked for their services were the parents, who ensured the youth could participate from October 2021 in the programme, including on Saturdays during prep sessions; the teachers who helped and their educational institutions as well as the sponsors: Harneys, the principal funder of the programme, Government Information Services (GIS) and Radio Cayman.